The Three Stooges from Hell 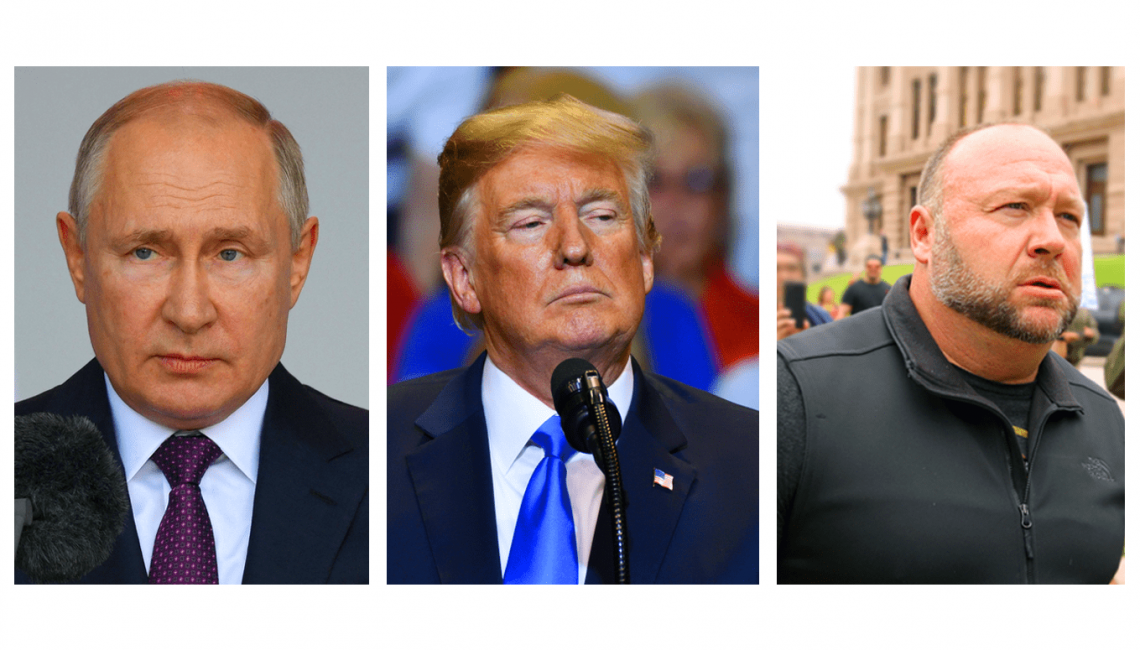 Well, the three stooges in question are certainly having a well-deserved hard time of it lately, aren’t they?  A lot of comparisons were drawn between Donald Trump and Vladimir Putin last week, and if there’s anyone just as vile as both of them, it’s Alex Jones, whose performance on the witness stand facing the parents of children killed at Sandy Hook was frightening to behold. The common thread isn’t only the stooges’ evil deeds but their inscrutable minds and their growing detachment from reality as they descend into tragic self-parody.

The stooges have all been exposed for what they are, colossal failures, losers and, of course, irredeemable monsters.  We now know what we always suspected, the “Trump Organization” is nothing but a sham, a lifelong grift concocted by one of the world’s greatest snake oil salesmen. Indeed, the “Art of the Deal” was never anything more than the “art of the steal.” Is it any wonder that Trump declassified documents in his mind, “even by thinking about it,” a claim as fictional as his wealth and accomplishments?

Meanwhile, megalomaniac Putin’s “mighty Russian army” has shown itself to be no less a sham than Trump’s legendary business acumen. Despite demonstrating its capacity to commit Nazi-like war crimes, the so-called “second most powerful army in the world” proved incapable of accomplishing its mission in Ukraine. Putin is now working to coerce 300,000 new recruits to join his failed, slaughtered army, and men are fleeing the country in droves to avoid a certain death. (Wouldn’t it be great if all the MAGAs, rather than fight for Trump, got the heck out of our country?) Putin still thinks he can win his war of unprovoked aggression by threatening to use tactical nukes and freezing European citizens this winter until their governments are forced to abandon support for Ukraine, but how many Russian citizens can he throw in a gulag?

It has Been Said of Fascist Leaders Like Adolph Hitler, “Normal Men Do Not Know that Everything is Possible,” and Lord Knows these Three Stooges are Decidedly Abnormal.

Trump seemingly thinks he can avoid indictment by dangling the threat of MAGA violence.  And while Putin calls up 300,000 new recruits to rescue his disastrous war in Ukraine, similar desperation is driving Trump to openly embrace QAnon and its followers, the wackiest of wacky MAGAs, who believe he is leading a secret war against pedophiles and cannibals (liberal elites and Democrats) whom he will arrest and execute when he is returned to power, an event known as “the storm.” Like Putin, he’s desperate and down to tapping his last batch of pitiful suckers.

And as mentally deranged as these horrible stooges are, they’re not exactly the picture of physical health either. When Trump sweats on stage, grasping the podium and bellowing his lies, he looks like he’s about to keel over from a massive coronary or a stroke.  Alex Jones, obese and busting out of his shirt on the witness stand as if he’s about to explode and spew bullshit all over the courtroom, is even scarier to behold. (To think this living testament to good health and fitness made millions selling “nutritional supplements” to his followers!) Puffy, forlorn looking Putin may be the least likely of the three to drop dead before our eyes, but he is rumored to have cancer or another fatal ailment.

All in all, these three stooges from hell have become a surreal nightmare of the “angry white man” approaching his inevitable end.