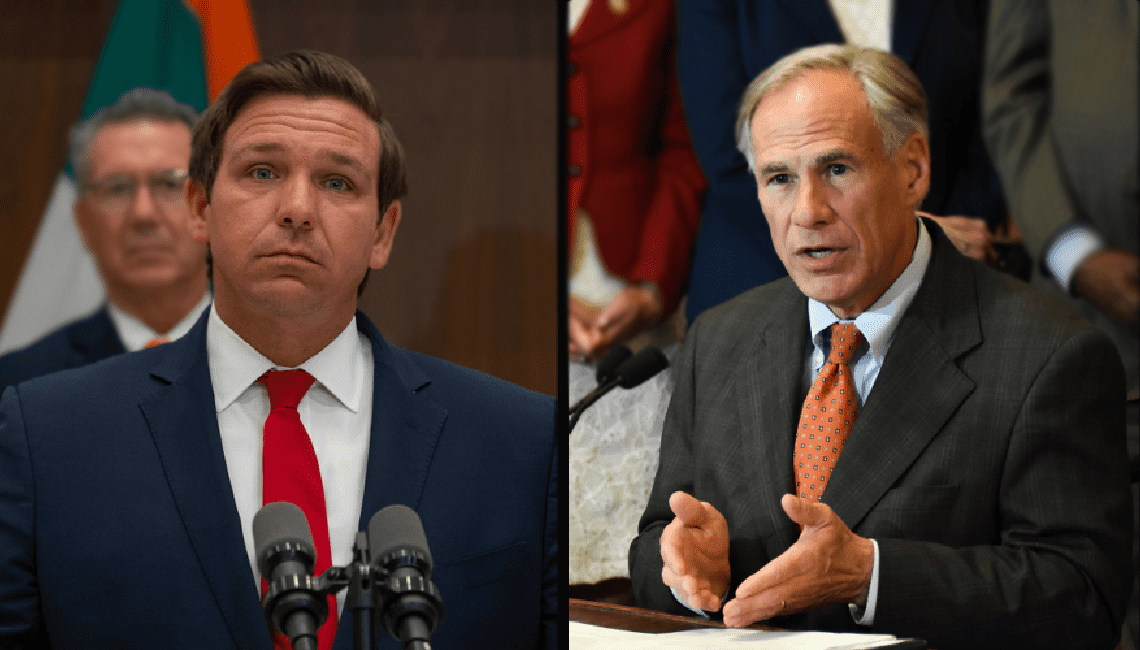 Is there no end to what Governors DeSantis of Florida and Abbott of Texas will do to capitalize on the xenophobia and paranoia of their “base”? If there’s anything that upsets MAGAs more than the threat of black crime, it’s the threat of brown immigration. These people live in constant fear of being invaded and replaced (good ol’ “replacement theory”) by non-whites, and the MAGA-dominated Republican Party and their right-wing media allies make sure to stoke that fear whenever they can.  With the exception of “Antifa” running rampant in the streets, nothing fires up the MAGA base like its fear of “invasion” on our Southern border.

In fairness to the MAGAs, our immigration system, especially on our southern border, has been a broken, dysfunctional mess for years, passed down from administration to administration, with plenty of blame to go around. (A cliché that is often used to deflect responsibility, but in this case may be apt.) Right now the border may not be “open,” as Republican’s like to claim, but neither is it “secure,” as Vice President Harris and other Democrats promise. There is, in fact, a good deal of evidence that it’s leaking like a sieve.  Former President Trump’s infamous “border wall” remains far from complete and it’s highly questionable if it would really solve much of the problem anyway.  So right now the situation on our southern border remains another political football, while we fail to confront the many issues encapsulated by the subject of “immigration.”

Immigrants Impact the Labor Supply, Not the Drug Supply!

America has taken advantage of cheap immigrant labor since its founding. There’s the question of how many workers the country needs at any given time, depending on economic conditions.  When the housing boom went bust in 2008, thousands of immigrants working in construction either went home or went on the public dole (to use a favorite Republican term).  Despite the increased mechanization of agriculture, it seems farmers always need more laborers and long for the days (before 1965) when seasonal farmworkers weren’t “illegal.” And immigrants perform necessary jobs that most Americans don’t want, such as working in slaughterhouses and other unfortunate necessities of industrial farming (which should be abolished, but that’s a separate issue). When there’s a labor shortage (such as there is now) most Americans acknowledge the need for immigrants to fill the void.  In times of high unemployment, however, those same immigrants are painted as undesirable villains.

The “Invasion” of immigrants is just one more distraction being fed to the MAGA “base.”

Trump is the chosen candidate of reactionary billionaires and fanatical opponents of racial and gender equality for a reason. Strip away the thin veneer of “populism,” and what you have in the Trumpified Republican Party is an old-fashioned movement to restrain democratic self-government for the sake of capital and hierarchy. . . It is not that Trump and the Republican Party are opposed to voting and elected office in and of themselves; it’s that they are opposed to a more equitable distribution of wealth and status, which a robust democracy—and only a robust democracy—makes possible. They are opposed to anything that might undermine the domination over others by people like themselves.

The importing of illegal drugs is another complex problem that is deliberately misrepresented by Republicans to motivate voters.  Large quantities of drugs are most definitely coming across our southern border, most recently fentanyl in particular, but they are rarely brought by immigrants.  By all accounts, the vast majority of fentanyl is coming though major entry points, as well as via air and sea. (Can you honestly picture immigrants who walk all the way from Central America carrying hardly anything but the clothes on their back bringing in large quantities of drugs?)

Thanks to Our Polarized, Dysfunctional Politics, America is Failing its Responsibility to Refugees and Asylum Seekers.

The other half of the drug equation is how the violence and corruption the industry fosters has all but destroyed the countries of Central America, especially Honduras, Guatemala and El Salvador, encouraging a mass exodus of the population.  And now we have refugees and asylum seekers coming from as far away as Venezuela (such as those Governor DeSantis transported to Martha’s Vineyard) and other parts of the world, even Ukraine.  Finally, as has been the case in Europe, we are also feeling the impact of climate change on the world’s food supply and hence still more refugees will undoubtedly be making their way to our southern border before long.

The problems are only getting bigger and more complex, and there will be a lot more blame to go around until our political leadership—on both sides of the aisle—set about addressing the real issues involved—which admittedly this humble spirit has only touched on here.