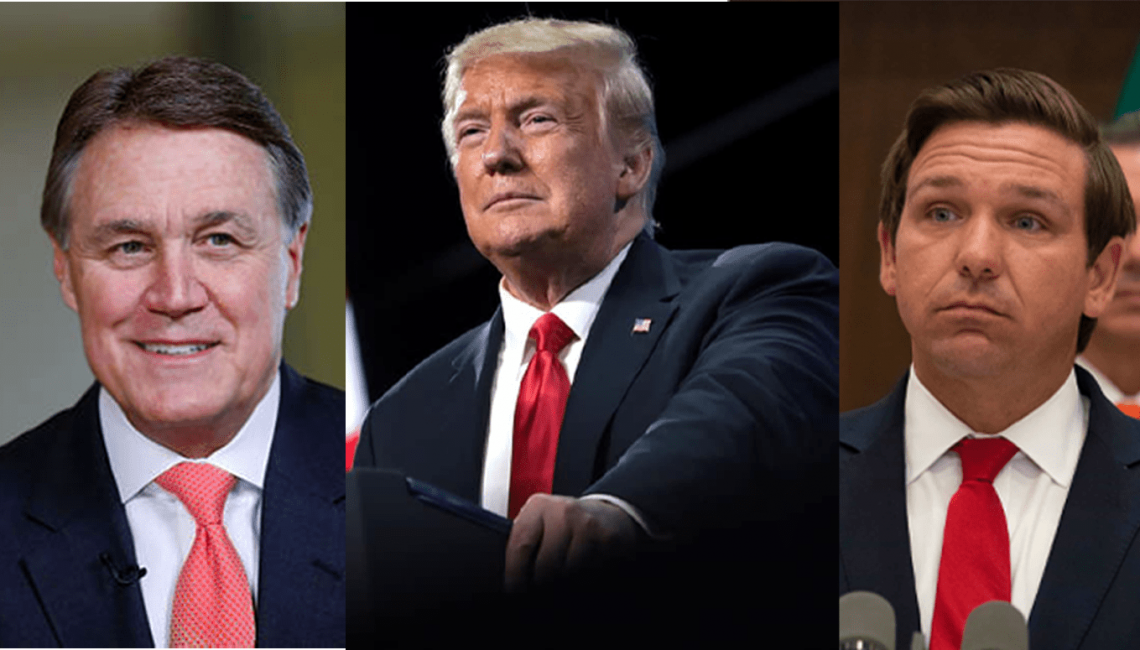 Trump and the rest of his MAGA Republican cohort just keep on keeping on, telling their “base” what they want to hear, again and again.  And Trump’s “big lie”—that the 2020 election was stolen from him—is still at the top of the list.  As we all know, however, the falsehood that elections are being stolen by evil “leftists” is nothing but a convenient excuse for Republicans to steal elections they can no longer win fairly at the ballot box. Thus the assault on voting rights now underway across the country—nineteen Republican-dominated states have passed 33 laws to make it harder for Democratic constituencies to vote, or to turn over the counting of votes to partisan Republican officials.

A few weeks back I talked about Florida governor Ron DeSantis forming his own militia, but now he’s doing himself one better—he wants a special “Office of Election Crime and Security,” to “investigate, detect, apprehend, and arrest anyone for alleged violation” of voting laws. “To ensure that elections are conducted in accordance with the rule of law,” he said, “I propose an election integrity unit whose sole focus will be the enforcement of Florida’s election laws.” There’s no reason, of course, to think Florida’s elections need policing; DeSantis is simply laying the groundwork for 2024 in case the Republicans lose.

Former Georgia Senator David Perdue, now running for governor, is calling for a similar force, an “Election Law Enforcement Division,” as he calls it, “charged with enforcing election laws, investigating election crimes and fraud, and arresting those who commit these offenses.”  In other words, if the Republicans lose again in Georgia, they’ll be better prepared to arrest their political opponents.  It’s more evidence of just how frightened MAGAs are of the “other” voting in greater numbers, those black and brown people who are supposedly taking their country away and “replacing” them.

DeSantis has also proposed legislation to prohibit schools and businesses from making anyone feel “discomfort” based on the teaching or training of race-related subject matter.  He and his allies pretend they are stopping the proliferation of Critical Race Theory (CRT), but it’s nothing but an excuse to censor education and prevent teaching the truth about American history.  As I and so many others have stated repeatedly, CRT is NOT taught in any K-12 school in Florida or anywhere else, but its tenets are a threat to the governor’s paranoid MAGA base for whom nothing is more frightening than having to face the truth about their past.

Meanwhile, former president Trump tells a MAGA audience that white people are being made to stand at the end of the line to be treated for COVID. (He can’t say “vaccinations” because most of his followers refuse to get vaccinated!) What happened to the good, old-fashioned “dog whistle”?  Trump’s ridiculous fabrication is pure stoking of racial hatred and paranoia.  No matter how cynical and dishonest Trump may be, there is still the question of how these people became so susceptible to his lies, why they want to believe them so badly.  This humble spirit has been hovering about the earth for over 150 years now, and I still can’t figure it out.

In the MAGA world, white people are constantly threatened by black and brown boogeymen.  As many REAL problems as our country is facing, a significant number of our citizens still believe that the threat of the “other” is at the top of the list.  Over 50 years after the end of Jim Crow, and over 100 years after The Birth of a Nation helped rejuvenate the Klan, these people still have the same mindset and aren’t about to change.  As much as we may hate Donald Trump, Ron DeSantis, and all the other MAGA Republican politicians, let’s not fool ourselves as to how many of our fellow citizens they represent.