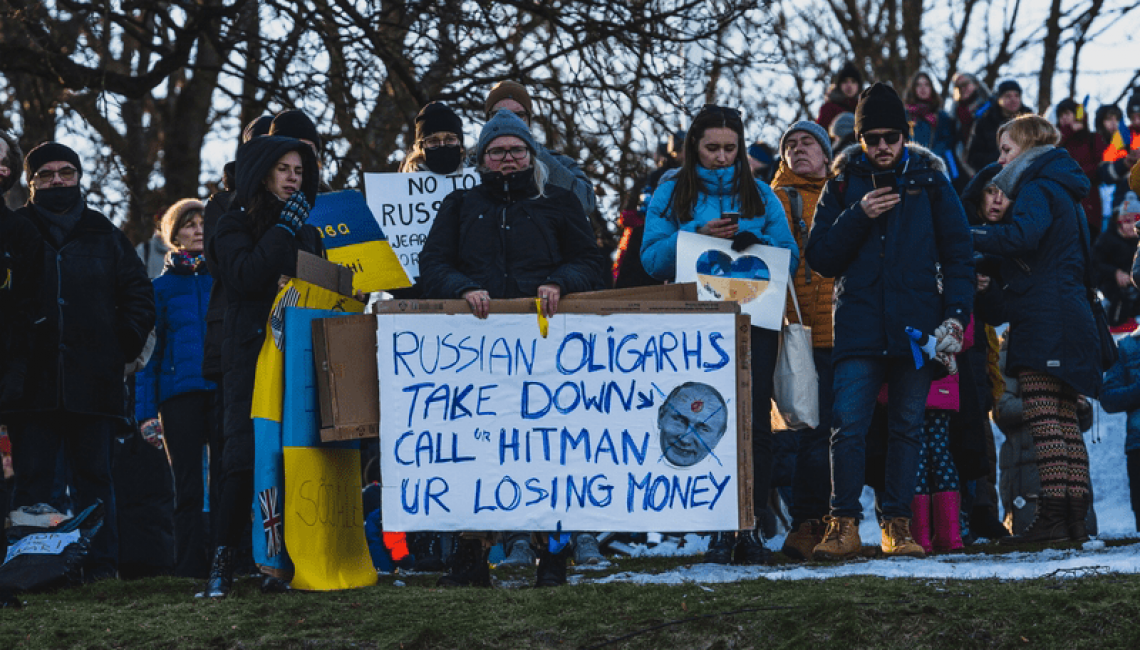 Take a look below at Russia’s richest oligarchs. Along with Vladimir Putin, they are the greedy old dudes who own and control Russia, most especially it’s vast natural resources, including its oil, gas and coal.  While it is hard to determine the balance of power between Putin and his oligarchs—some say they have long-since relinquished their power, while others say Putin is at their mercy—together they are destroying Ukraine and killing its people. Do the oligarchs care if thousands of Ukrainian citizens die on behalf of Putin’s megalomania?  Given they didn’t seem to care about the hundreds of thousands he killed in Chechnya and Syria, it’s unlikely.  Do they care how many conscripted Russian soldiers die carrying out Putin’s slaughter?  No, they only care about their wealth, which is why sanctions targeted at Putin and his oligarchs are so important if we want to stop the fighting in Ukraine.

And take a look at the source of the oligarch’s wealth.  You don’t see many entrepreneurs, do you?  There certainly aren’t a lot of technological innovators on the list.  No, these dudes just plunder Russia’s natural resources for their own enrichment while the majority of Russia’s people stay poor and powerless.  As I said last week, the oligarchs are a lot like the lords of the 19th century “slave power,” those greedy slaveholding bastards who killed thousands of soldiers fighting for both North and South in a war to save their “Cotton Kingdom.”

While the vast majority of Americans and the rest of the world support Ukraine in its fight against the Russian invasion, Congressman Madison Cawthorn (R, NC) has called President Zelensky a “thug” and claimed “the Ukrainian government is incredibly corrupt and incredibly evil and has been pushing woke ideologies.” A spokesman later said that Cawthorn was talking about “pro-Ukraine information” designed to pull the U.S. into the war and claims he “supports Ukraine and the Ukrainian President’s efforts to defend their country against Russian aggression but does not want America drawn into another conflict through emotional manipulation.” Yeah, sure he does. Cawthorn, who aspires to being Trump’s third son, hates Zelensky for standing up to his dad’s buddy, Putin. (It’s more than a coincidence that Trump’s first impeachment was for trying to withhold military aid to Ukraine!) There is no evidence that Zelensky or his government are corrupt or evil, and only an ignorant right-wing MAGA like Cawthorn, who thinks “woke ideologies” are worse than the slaughter of innocent people, would say such a thing.

This humble spirit believes that our ever-growing economic inequality is America’s biggest problem, the root cause of a lot of our other problems. Russia is a good lesson in what can happen when inequality is finally so pronounced that the people no longer matter and have no say in their government.  Russia, which has the world’s largest nuclear arsenal, is America’s worst nightmare in more ways than one: given America’s economic inequality already exceeds Russia’s, if we’re not careful we’ll become a kleptocracy as well.

And last but hardly least. . . fellow KGB officers and other old friends of Putin’s: