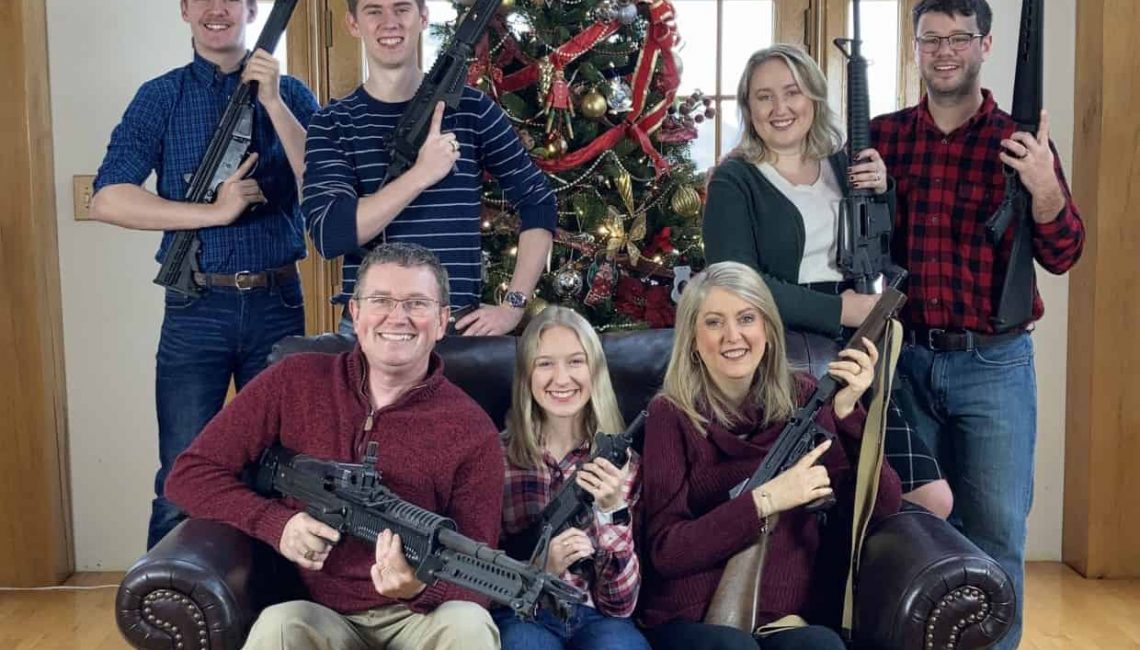 With Christmas nearly upon us, I just can’t get Representative Thomas Massie’s delightful Christmas card out of my head.  Who could forget the joyous holiday scene, the happy, widely grinning, gun-toting family—including his bright-eyed teenage kids, all clutching their high-powered weapons—coming just a day after the terrible school shooting at Oxford Highschool in which four students died and several more were seriously wounded by a student brandishing a semi-automatic pistol his parents gave him for Christmas.  We should also not forget that by one tally, so far this year there have been almost 50 shootings at K-12 schools, a new record.  Suffice to say, such a display on the Massie’s part went beyond bad judgement and bad taste and entered the realm of the surreal, like a new, right-wing version of “American Gothic.” (It’s been pointed out that Massie’s eastern Kentucky district suffers from generations of inbreeding, but this humble spirit will aim for the highroad.)

“Santa, please bring ammo”!? Can someone please explain to me what Christianity and the teachings of Christ have to do with threatening to shoot people dead?  Talk about commercializing Christmas!  Of all the hideous, moronic fundraising stunts undertaken by MAGA Republican politicians in recent months, and they are almost too numerous to count, none has compared to this one.  Lauren Boebert quickly followed up with a cheap imitation in which her own children posed with guns, but alas it lacked Massie’s panache and the shock value was gone.  Marjorie Taylor Greene used a rifle to shoot and blow up a Toyota Prius with “Socialism” written on the side (how that girl hates the Green New Deal!) a few weeks earlier, but clearly she’s been outclassed by Massie.

“Santa, please bring ammo”!? Indeed, in a single inspired stroke, Massie surpassed all the outlandish antics of Greene, Boebert, Matt Gaetz (hasn’t he gone to prison yet for sex trafficking minors?), Madison Cawthorn (who thinks women are “earthen vessels” for bearing children), and all the rest of the MAGA crew. Talk about a race to the bottom!  I know I’ve used that phrase before, but that’s what it is.  House Minority Leader McCarthy should condemn their behavior in the strongest terms but that’s unlikely to happen as long as they’re popular with the MAGA base.  Massie claimed he was delighted the photograph was so disturbing to “leftists” (presumably defined as anyone with a child in grades K-12 subject to being shot), and indeed he takes the prize.

Talk About a Portrait of What’s Wrong with MAGA America!

“Santa, please bring ammo”!?  Exactly what was Massie’s intended message?  We’re proud of our guns?  We dare you to try to take our guns away?  We can never have enough guns and they will never be as big and powerful as we want them to be? (It’s already been quipped that Santa should bring those boys some XS condoms, but I said I’d take the highroad.)  Or maybe it’s more about white power, as in we’d rather die than surrender our white privilege!  (Do those kids really have to be so lily-white and blond?)  Have you ever seen anything like the blissful arrogance in those gleeful faces?  For Massie and his family, Christmas is just one more opportunity to threaten their fellow men and tear their country apart. Talk about a portrait of what’s wrong with MAGA America!

The gun and ammunition makers—with the help of MAGA politicians and the NRA, of course—continue to line their greedy pockets based on the paranoia, fear, and bigoted anger of a sad, deluded portion of the American public. That’s the real fundraising that’s going on here, year after year with no end in sight, and Christmas is just one more opportunity for Americans to kill each other.  Yes, it’s the ultimate commercialization of Christmas.