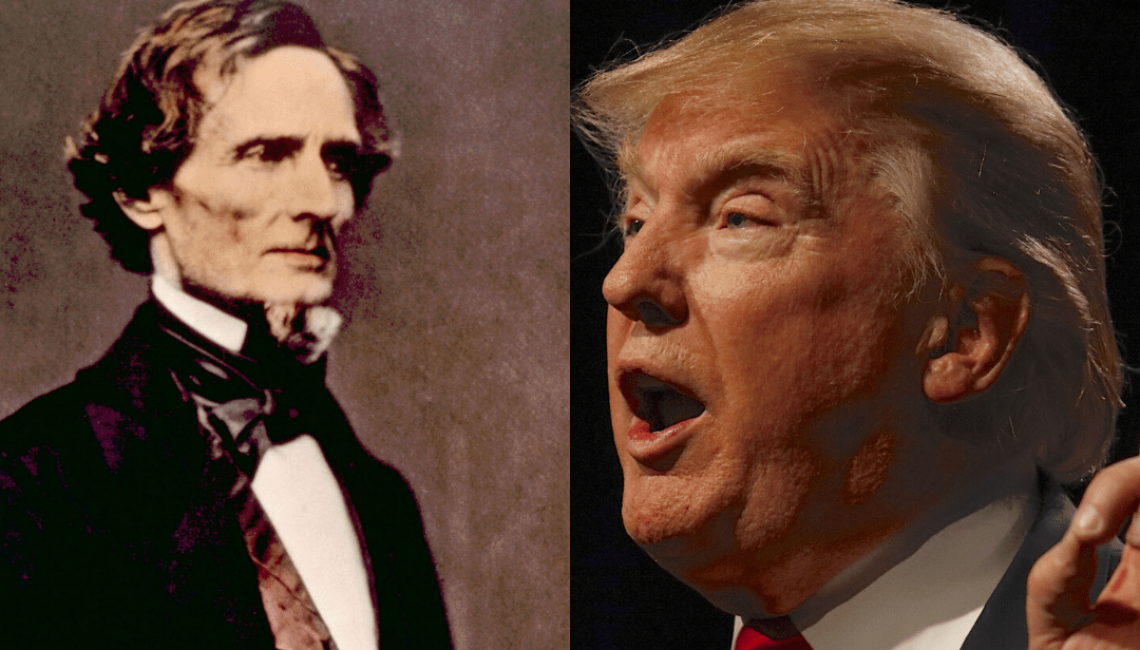 This former Confederate officer has hesitated to say anything until now, despite it being painfully obvious, but President Trump reminds me all too much of Jefferson Davis, President of the Confederate States of America—and that’s an insult to both of them!

President Trump’s pathological narcissism in the face of the coronavirus crisis is devastating to behold. Throughout his presidency, he has repeatedly demonstrated that he cares nothing about anyone or anything but himself and his reelection, but in the past several weeks, he has outdone himself. He has made it abundantly clear that he does not care in the least if people get sick and die, or how their lives are disrupted by the disease. He only cares how events reflect on HIM. Above all, he is terrified of the stock market tanking and the economy going into recession, because a strong economy has been his only argument (no matter how false!) for his reelection in November. Well, guess what; thanks in good part to his administration’s incompetent handling of the situation, the stock market has already plunged and most economists agree a recession is probably unavoidable.

President Trump Lied to Cover up the Facts About COVID-19.

In order to avoid the inevitable impact of the spreading epidemic, the President repeatedly lied to hide the facts from the American people. He lied and lied and lied, only this time his lies mattered more than ever, because they impacted potentially life-and-death decisions. Even now, as people’s lives are being disrupted—schools closed, events cancelled, travel curtailed—he refuses to take any responsibility for what has occurred. As per usual, NOTHING is HIS fault. Not only that, but he has the audacity to claim he slowed the epidemic’s progress by banning travel from China, despite his failing to take innumerable actions that might have had a more significant impact, including ensuring the availability of testing kits—what has shown itself to be the greatest barrier to preventing the disease from spreading. As it now stands, given we can’t test all the people we should, we can’t even measure the epidemic’s progress.

The Trump Administration’s Incompetent Blunders Continue on a Daily Basis.

Surely it is more than coincidental that Trump, the demagoguing hater of the “other, who from the day he announced his candidacy has railed against immigrants and championed the notion of an America threatened by foreign invaders—whether from south of the border, the middle east or elsewhere—casts the coronavirus epidemic in similar terms. He calls it a “foreign” virus and stops travel from overseas (first China, but now Europe as well), when it is clear that the availability of testing kits, respirators and hospital beds are far greater priorities. The Trump administration’s incompetent blunders continue on a daily basis, and indeed, it’s hard to distinguish the lies from the stupidities; after all, he IS the President who doesn’t believe in science.

Getting back to Jefferson Davis, the president of the Cotton Kingdom’s accursed, damnable Confederacy, we can only thank God that many of the qualities he shared with President Trump contributed to the Confederacy’s defeat. Amongst his many blunders, not only did he mistakenly believe he should command the Confederate armies in the field, but most historians agree that his ill-advised military strategy ensured the South’s defeat from the beginning. Like President Trump, he was ruled by narcissism, listened to no one, and believed he was always right, despite overwhelming evidence to the contrary. He never reevaluated any of his policies and was incapable of admitting he was wrong about anything. As one historian aptly put it, he possessed an “almost unbearable need to be appreciated.” Sound familiar? And just like President Trump, based on his exceedingly unpleasant temperament, those around him rarely pointed out his failings.
While we can all take pleasure in the Confederacy’s defeat, we cannot allow Trump’s Davis-like shortcomings to stand in the way of our country defeating the coronavirus!