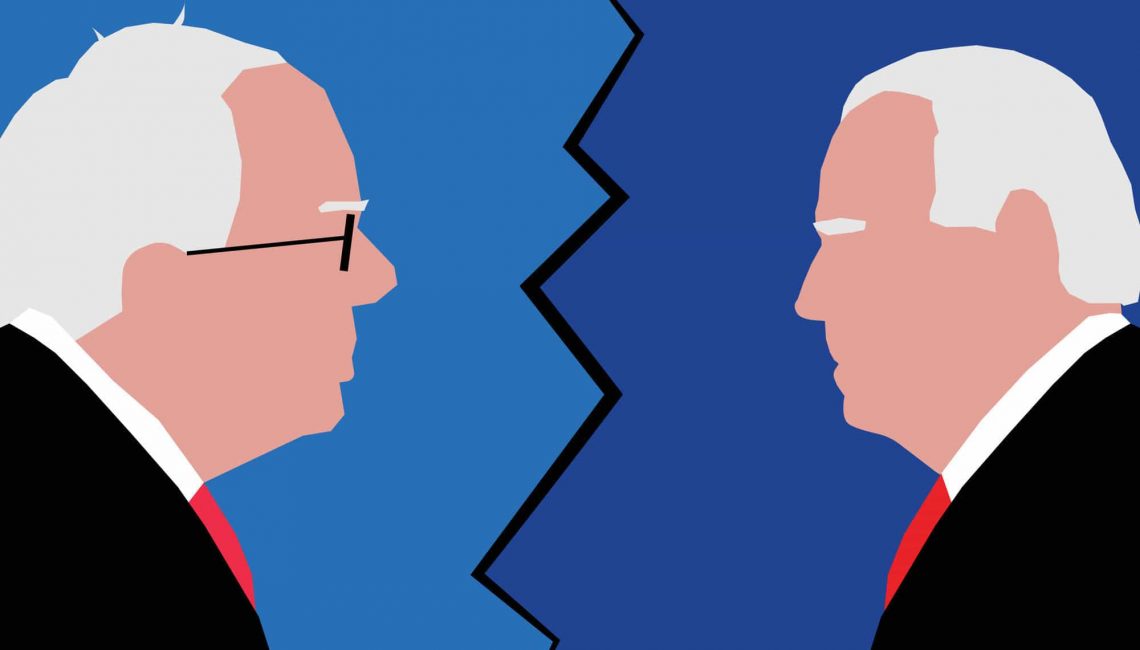 Anything about “old white men” given I’m approaching two hundred years old and about as Anglo Saxon as they come… Blond-haired and blue-eyed, all the usual stereotypes that come to mind. (Supposedly my family descended from the ancient kings of England, but that’s what most all the Southern cadets at West Point said back in my day, so who knows?)

But what a disappointment to watch the Democratic Party’s diverse field of presidential nominees be whittled down to two old white men—Bernie Sanders and Joe Biden.  I’m not saying they’re bad guys, but what did we all do to end up voting for our grandfather? Maybe today 70 is the new 60, and all that, but in my day most men didn’t even live to 70, let alone 78 and 77, like Bernie and Joe respectively.  But age and white hair aside, what happened to the party that only a few months ago prided itself on its diversity, as in people of color and women?

As I expressed a few months back, as someone who lived in a time when women weren’t even allowed to vote (the 19th Amendment giving women the right to vote wasn’t ratified until 1920!), let alone run for President, I’m still hoping for a woman president before I turn 200, which only gives me until 2038, so that only leaves a few elections to go.  As you might imagine, I took a good deal of satisfaction when Barack Obama was elected our first African American president in 2008, but we should recognize we still have a long way to go, never mind making up for the first two centuries of American history.

Back in my day (antebellum America, that is), no one ever dreamed that our country would ever have a woman president.  Queen Victoria had ascended to the throne in 1837 (the year before I was born), but unless you were a queen, a woman didn’t have the opportunity to lead a country—or much of anything.  And along with the rest of my generation of white men, it never occurred to me that women should have the right to vote. Most of us were too consumed with arguments over slavery and whether Negroes were human beings entitled to citizenship (according to the Dred-Scott Supreme Court decision of 1857, they weren’t) to seriously consider the issue of women’s rights.  And my roommate at West Point was too busy accusing me of being an abolitionist, a socialist, and an atheist to accuse me of being a feminist. (Heck, the words “feminist” and “feminism” didn’t appear in the United States until the early 20th century.)  The women’s suffrage movement may have begun in 1848 when a women’s rights convention was held in Seneca Falls, NY, but not too many people knew about it or cared.

So back to where things stand today.  I would never advocate for people voting solely based on race or gender, but when one looks at the recent Democratic primary contest, it would appear that certain segments of the electorate might have done a better job of exploring the options available to them.  Why didn’t more black folks support Cory Booker? As it was, he had to drop out of the race for lack of money long before the Iowa caucus. And what about Elizabeth Warren only getting 10-15% of the vote in many states on “super Tuesday,” despite the fact that she was the only female candidate still in the running?  Don’t women constitute at least half the electorate? For all the talk of sexism and white privilege (a good deal of the latter coming from me!), there’s reason to think that a good portion of women voters simply don’t care. You would be right to point out that the money necessary to sustain a campaign comes primarily from a corporate America that is still overwhelmingly dominated by (old) white men (what did you think of that old Mike Bloomberg dude spending almost a half billion of his own money!), but I don’t think that lets the rest of us off the hook.  We could all do better if we really want to see things change.