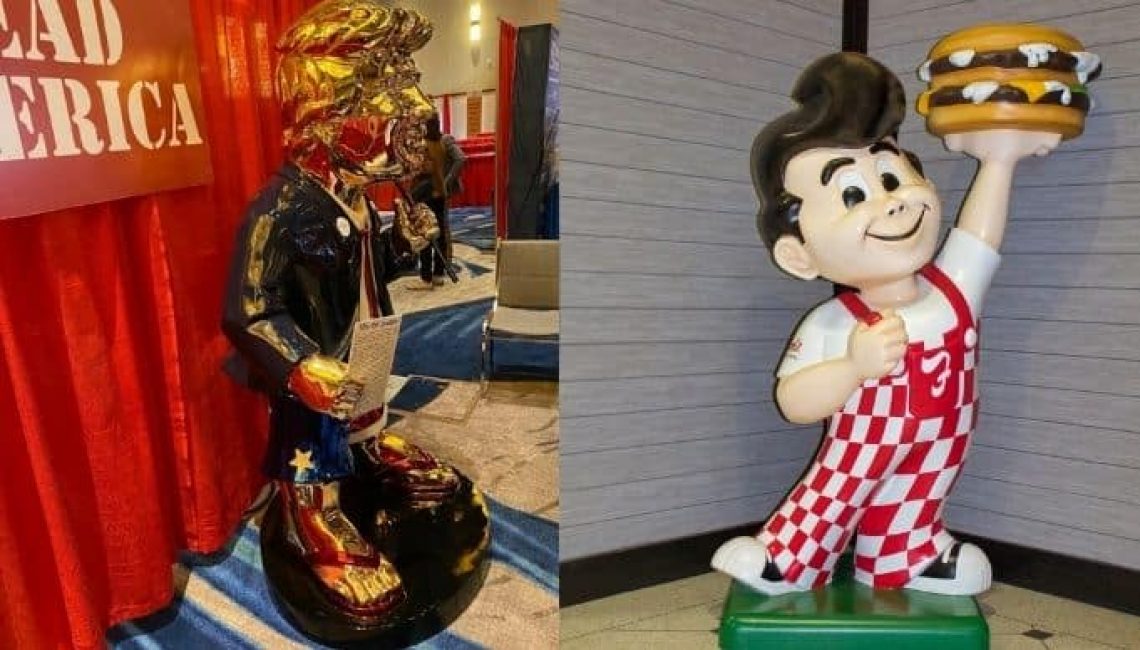 So, have you seen the hideous golden statue of former president Trump they wheeled out at CPAC—the annual meeting of the Conservative Political Action Conference?  I grew up in antebellum Alabama rather than post World War II Southern California, but apparently it really does resemble the famous Bob’s Big Boy statue that stands outside all it’s burger joints.  In short, if you stayed up nights trying to create something as tasteless and grotesque as Donald Trump himself, you probably couldn’t do a better job.  But clearly the people at CPAC don’t realize how grotesque Trump is, and needless to say, they don’t realize how grotesque they are.  We can remain puzzled as to what these people see in Donald Trump, the lowest level of grifter, a fraud and a demagogue, who even tried to overthrow our democracy to hold onto power, but no explanation is likely to make our present situation any better.  As I’ve said before, Trump’s Republican base has shown us who they are—and we need to believe them, even if it isn’t a pretty sight.

This new breed of “Trump Republican,” who were crawling all around at CPAC last weekend, continue to reveal their true colors, along with their hatred for people of color.  They are not only the party of “no”—no action and no change for the better—they are the party of no immigrants, as in no potential threat to the white majority, meaning no threat to what they like to call “the American way of life.” When Trump talks about “Taking back our country” and claims “Our incredible journey has only just begun,” it’s pretty damn scary, especially if you’re not white.

Donald Trump and CPAC Cater to a Dangerous and Desperate Market

To be charitable, to muster all the empathy I can for the umpteenth time, Trump Republicans are trying to preserve an America that existed after World War II, when most of the world lay in ruins and America was the world’s economic and military superpower.  Most importantly, perhaps, back then a white man with only a high school education could support a family in a middle-class lifestyle.  In those days, most consumer products were manufactured in the good ol’ USA, and industries like autos, appliances, and electronics (yes, believe it or not, they used to build those here) were booming.  But the world has changed: for better and admittedly for worse, today we live in a globalized, post-industrial, technological, information-based economy.  The sad fact is, Trump Republicans love to scream about socialism and the radical left, but given their lack of suitability for competing in the modern world, most of them should pray for socialism!

Not surprisingly, a lot of Americans wish life had remained as it was in the last half of the 20th century, but no matter how many lies Donald Trump tells his loyal followers to the contrary, America simply no longer has the advantages it once did, and the country they long for isn’t coming back.  Make no mistake, Donald Trump and CPAC are catering to what has become a dangerous and desperate market.  Many of the “Trump Republicans” live in fear that the “elites” are using minorities and immigrants to deliberately destroy the America they love.  They honestly believe their own circumstances are now worse than those of African Americans, people who lived through hundreds of years of slavery and Jim Crow, and their “white grievance” reached a crescendo on January 6th at the U.S. Capitol. I know I’ve said it before, but it is simply the overwhelming reality: a big chunk of the American people are reluctant to accept the realities of the modern world and want to live in a never-never land of yesteryear where white Americans ruled supreme with no threat to their privilege.