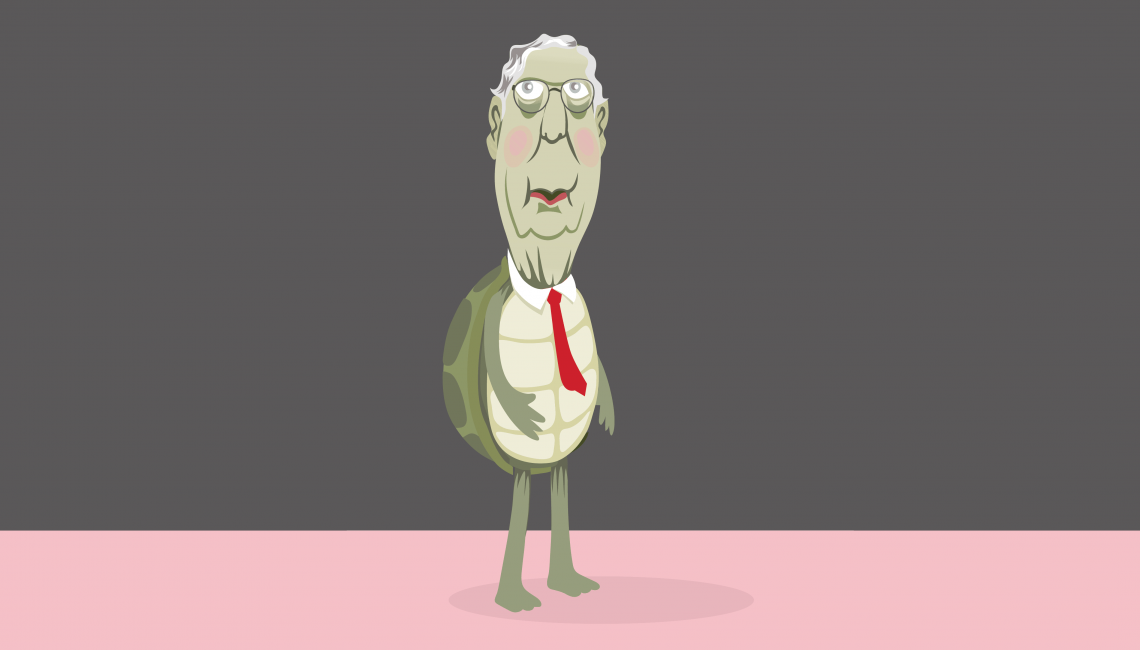 I‘m sorry that old age has made Mitch McConnell look like a turtle’s grandfather (although they say time gives you the face your deserve), but the man is so determined to prevent our government from accomplishing anything on behalf of the American people that he is now vowing to withdraw his support from two important pieces of legislation he previously signed on to—the CHIPS Act and the PACT bill—seemingly in retaliation for Democrats trying pass the “Inflation Reduction Act,” a slimmed down version of “Build Back Better” that’s based on a deal struck between Senator Joe Manchin (D, W.VA) and Senate Majority Leader Schumer (D. NY).

The CHIPS Act is a large industrial policy bill designed to increase America’s competitiveness with China and reduce our dependence on Taiwan’s semiconductor chips. (As a transplant from the 19th century I’m no tech expert, but I know that semiconductor chips are necessary to build just about anything these days, including autos and all sorts of military equipment.)  The U.S. desperately needs to produce its own chips, something that should have been addressed years ago and is now especially urgent given the rising tensions with China over Taiwan, which currently produces the majority of the world’s chips.

McConnell and the Republican leadership also withdrew their support for the PACT (Promise to Address Comprehensive Toxins) bill, which would provide medical benefits for thousands of American veterans exposed to burn pits and other toxins.  The Republicans like to claim they support the police and the military, but their position proves they don’t care about anyone but the top 1%, their true constituents.  Remember, despite the recent talk of White Christian Nationalism infiltrating the Republican Party, the Republicans’ only true religion is supporting inequality at the expense of the majority of Americans.

When it Comes to Climate Change, the Republicans Act as if They Don’t Live on Earth—Because They Don’t!

“Democrats have already crushed American families with historic inflation.  Now they want to pile on giant tax hikes that will hammer workers and kill many thousands of American jobs.  First, they killed your family’s budget.  Now they want to kill your job too.”

That almost generic response tells us a lot about McConnell views the world.  The fact is, the bill’s only tax hikes are on corporations and the rich (no increases for individuals making less than $400k a year). But to McConnell’sway of thinking, the business response to higher taxes will be, and should be, to cut jobs—in other words, dare to threaten our profits and we’ll punish workers.  That’s the oldest ploy in book, with the possible exception of stirring up racial conflict to distract people from the real issues.  He conveniently ignores the thousands of jobs that would be created as part of the transition to renewable clean-energy because he doesn’t want people to know. The Republicans are in the pocket of the fossil fuel industry and big pharma, full stop.  Speaking of big pharma, McConnell completely ignores the provision in the bill that allows Medicare to negotiate drug prices and reduce seniors’ costs.  Why?  Because it will cut into big pharma’s profits, something the industry and its Republican allies have fought for years.

Republicans Like to Say “Taxes Roll Downhill,” but They’re Always Happy to Give Them a Nice Big Push.

McConnell and his ilk like to give the American public lessons in supply-side, trickle-down, a rising tide lifts all bullshit economics every chance they get, courtesy of the late Milton Friedman and the should be late Art Laffer, among others. The Republicans and their economist heroes may know how the system works for those at the top, but unfortunately what was once good for General Motors may no longer be good for America.  Or rather, what is now good for big oil, big pharma, big tech and the big banks is definitely no longer good for America.  A society that harbors as much injustice and inequality as ours does can only function for so long.

McConnell and the Republicans would surely die a thousand deaths before suggesting that corporations should cut their insanely high executive pay instead of cutting jobs. It’s just like our tax code skewed to the benefit of big business and the wealthy that over time has become the norm; if you want to change it you are labeled a socialist or a communist, as if the current system was act of God or nature, not something created by the people it benefits most.

The Republicans’ last stand is to threaten us: if you don’t submit to greater and greater inequality we will punish you by making things even worse.  It reminds me of that poor frog who finally succumbs as the pot of water slowly comes to a boil.  America has to take the risk and jump out of the pot once and for all, because the alternative is a slow, miserable death.